Volumetric additive manufacturing (VAM) is a photopolymer-based 3D printing process that produces complex 3D structures in one step. When compared to a layer-by-layer 3D printing process, VAM cuts down on build time and greatly reduces the potential for print defects.

Until recently, VAM was typically associated with the use of acrylate-based chemistry and soft hydrogels. While acrylate polymerization can effortlessly print layerless whole parts, acrylate-based resins are limited by their durability and overall mechanical performance. Researchers at Lawrence Livermore National Laboratory (LLNL) were determined to broaden the range of available VAM resins by introducing alternative crosslinking chemistries into their process. And with the addition of DLi’s CEL5500 UV Light Engine, their team discovered a new resin formula for VAM using thiol-ene chemistry.

Thiol-Ene-based polymers have been increasingly drawing the attention of researchers for additive manufacturing because of their more controllable mechanical properties. Thiol-ene materials have previously been examined for use in adhesives, electronics, and biomaterials, but LLNL is the first known group to report their study for thiol-ene resin for VAM-printed parts. 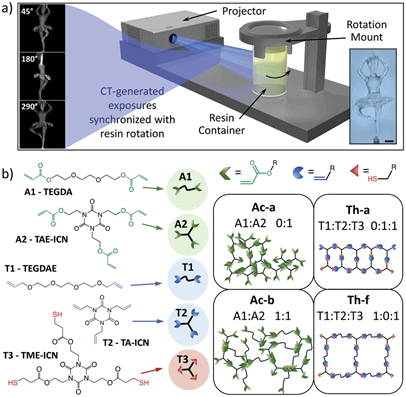 Their VAM system setup involves the resin being placed in a cylindrical vial. The vial of resin is then rotated while exposed to light. The print actually appears all at once as the light “accumulates” at the intended locations where once critical dosage is reached the entire structure solidifies simultaneously. The rotation of the resin allows the light to continue curing and solidifying the surfaces outside of the initial core print.

Through slight manipulations of the molecules in the resin, the team can control the flexibility of the printed parts. By creating a custom VAM printer setup that uses digital light processing (DLP), the overall complexities of their VAM printing process were simplified. The LLNL team utilized DLi’s CEL5500 Light Engine in their custom VAM system to produce a 3D projection of 405nm light.

“DLP projection provides a robust method to quickly and easily produce patterns of bright actinic light. This technically difficult job is made easy with DLP, as all of the details such as illumination source, software control, and robust packaging are done and on the shelf. The CEL5500 has been a great platform for us to build our experimental hardware around.”

The CEL5500 allows the team to precisely control the light when projecting it into the resin vat through use of the digital micromirror device (DMD). Similar to how VAM prints the geometry at once, the DLP technology easily facilitates the entire 3D printing process through a simple setup. See the LLNL video below to watch their experiment in action.

With the success of this thiol-ene-based resin research, the team foresees considerable growth within volumetric additive manufacturing. Researchers have a particular interest in using these materials in biological scaffolds, and VAM holds the key to overcoming the drawbacks of layer-based fabrication.

The principal investigator, LLNL engineer Maxim Shusteff, sees their achievement as a fundamental step towards vastly expanding the materials used in light-driven 3D printing. From here, the team plans to continue researching how resins behave at different light dosages to continue to work towards their initiative of creating high‐performance printed engineering polymers.

READ MORE
Back to Posts